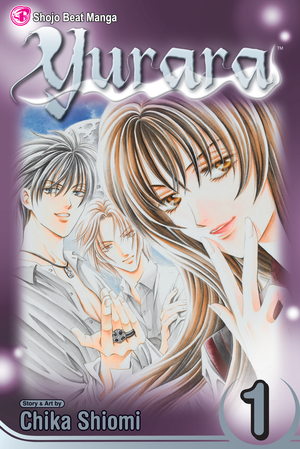 "There are two sides to every ghost story..."
Advertisement:

Yurara (Yurara no Tsuki, or "Yurara's Moon" in Japanese) is a supernatural shoujo manga by Chika Shiomi. It ran in Bessatsu Hana to Yume from 2003 to 2005, and was compiled into five volumes. Viz Media publishes the English version under its Shojo Beat imprint.

Yurara Tsukinowa has been seeing spirits all her life. What's more, she can sense their thoughts and feelings, and they are often so sad that it makes her cry. So she's always been seen as a strange girl, and has never had many friends.

Until she ends up in the same class as Mei Tendo and Yako Hoshino, the two most popular boys of the school... who can also see spirits. And not just that, they can fight them, too. The hotheaded Mei uses his Demon Fire to burn them, while always-cool Yako can use water to throw up protective barriers. Soon Yurara discovers that she, too, is not entirely defenseless - she's protected by a powerful Guardian Spirit, which allows her to transform into a tall, darkhaired beauty with the power to send spirits on to the afterlife.

Between the three of them they begin to attract more and more dangerous spirits, but that's not the only trouble that's brewing. Mei finds himself falling for Yurara, and as he starts spending more time with her, for some reason Yako becomes even less patient with him than usual...this is a shoujo manga, after all.

There is a sequel called Rasetsu (Rasetsu no Hana in Japanese), also published by Viz.