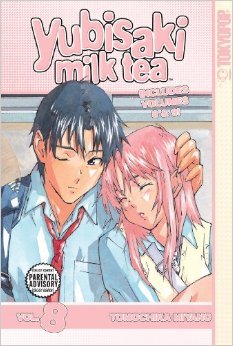 Yubisaki Milk Tea is a manga by Tomochika Miyano that ran between 2003 and 2010. It was originally planned as one volume, but it ended up with ten.

Yoshinori Ikeda is a high school boy who works part-time as a photographer. One day Yoshinori's older sister Miki has to model for the latter as a bride, but forgets and runs off on a date instead. Yoshinori is dragged in and has to wear the wedding dress instead. After that he finds out that he actually likes to crossdress and begins to get more and more into it, creating a female personality, Yuki. But Yoshinori/Yuki gets into a complicated love affair when he falls in love with both his lively neighbor girl Hidari Morii and his classmate, ice queen and honor student, Minamo Kurokawa. Since Minamo becomes a home tutor for Hidari it doesn't take long before they both know about it. Things however get more complicated when Yoshinori's best friend, Wataru, unknowingly falls for Yuki, all while both Wataru and Hidari also have their own admirers...

Compare with Wandering Son, one of the very few series, like Yubisaki Milk Tea to actually take transgender themes seriously.