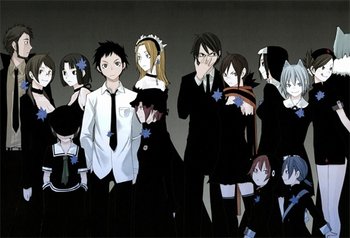 Sakura-Shinmachi, Setagaya Ward, Tokyo, Japan. The one town where humans and youkai can coexist. The gateway between this world and the Otherworld, the dimension from which youkai originally came. Protecting the town are Hime, Sakura-Shinmachi's superpowered high school girl mayor, and Akina, an "ordinary human" who holds the power to send youkai back to the other dimension and runs the Hiizumi Life Counselling Office to help keep them in this one. Along with their friends—the employees of the Life Counselling Office, mind-reading satori Ao and the embodier of words, Kotoha; Kyousuke, Hime's oni assistant, and Touka, Kyousuke's little sister—they protect the town from threats both external and much closer to home. In between hanging out like normal teenagers and eating copious amounts of ramen. Helping out are Yae, the nun-outfitted katana-wielding Land Goddess of Sakura-Shinmachi; her older brother Yuuhi, the dirty old man in a young boy's body Land God/Mayor of Setagaya Ward; his cosplaying immortal assistant, Mariabelle, and Juli, the nurse-outfitted youkai doctor idol of Sakura-Shinmachi. Yozakura Quartet is full of deep characterization, puzzle-piece plots, slice-of-life comedy, and more heartwarming moments than you can shake a stick at.

Debut manga of Yasuda Suzuhito, character designer of Kamisama Kazoku, Devil Survivor, Durarara!! and a large amount of Digimon games since Digimon World Re:Digitize. The manga began serialization in Monthly Shounen Sirius in 2006. It received an anime adaptation in 2008, which went into production when the manga was on its second volume, making in the anime and manga different enough that Suzuhito encouraged people to think of them as separate series and enjoy them both on their own merits.

The series has also since had an OVA that disregarded the 2008 anime's departures and adapted the manga's "Hoshi no Umi" (Sea of Stars) story arc much more faithfully, and a second series in the Fall 2013 season called Yozakura Quartet: Hana no Uta (Song of Flowers). Note that Hana no Uta skips the Hoshi no Umi arc without summarizing it beyond vague clips used during a Special Edition Title, making the OVA required viewing between episodes 8 and 9. Another OVA adapted the "Tsuki ni Naku" arc. A crossover manga with Durarara!!, titled YZQ ✕ DRRR!!, was released with the limited edition Blu-Ray of Hana no Uta.

The Tatsunoko adaptations provide examples of: