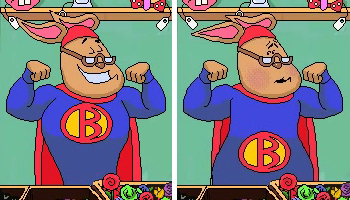 What goes up, must come down.
Advertisement:

A fairly common trope in animated works, this happens when a plump character tries to make themself look strong. They'll often do this by grabbing their fat waists and pushing them up, for the illusion of a narrow waist and barrel chest. The fat then drops back down into place for comedic effect—often accompanied by the sound of a deep timpani hit. If they are stout and strong, Fat and Proud, a Big Beautiful Man, a Big Beautiful Woman, or any combination of the above, they might just flex with both their fat and muscles on display.

There's some Truth in Television to this, as posing technique can significantly transform how someone looks. In the sport of Bodybuilding, where having a V-shaped upper body is rewarded, contestants who tend to have a blocky waist—or worse, are suffering from a distended midsection—can make themselves look more streamlined by sucking their gut in, which at the same time inflates the thorax and improves their taper. It’s difficult to keep it sucked in through an entire show, however, especially since bodybuilders compete while depleted of water and calories, and posing is more strenuous than it looks. Therefore, even if someone's midsection looks pretty respectable while they're locked into the pose, the moments when they relax or try to catch their breath can be very unflattering if they've got a bad case of bloating.

Compare Of Corsets Funny. See also Fake Muscles. Sister Trope to Flexing Those Non-Biceps, where the character doesn't even have fat to flex.