Shall I Repeat That? 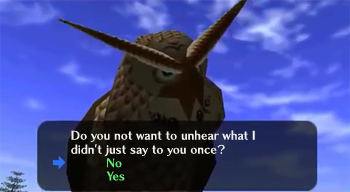 Uh...
Brentalfloss: And also there's this owl who will not shut up!
Dave Bulmer: Not one for reading then?
— The Legend of Zelda: Ocarina of Time With Lyrics
Advertisement:

In most plot-based video games, there is ordinary conversation, and then there's the important stuff. The descriptions of what you need to do next, the motivations of the villain, the basics of playing the game, that sort of thing. In order to make sure the player understands all this, they'll then ask if the player would like to hear it all over again. If the player agrees, they'll do so, repeating it exactly, even maintaining all the contextual cues that realistically shouldn't happen multiple times.

Sometimes asked as "Do you understand?", in which case you want to answer "Yes" to move on instead of "No".

If the cursor defaults to "Yes, I do want to hear that again" or "No, I don't understand", this may become a Scrappy Mechanic, since a player mashing the "A" button to skip the text as quickly as possible (especially if the text is dozens of pages long and scrolls slowly) is going to end up accidentally repeating it over and over until they learn from their mistake and say "No, I don't want to hear that again" or "Yes, I do understand" .(Although, considering the fact that this trope usually only comes into play with important text that you won't get to read again, it might not be a good idea to skip it at all.) Similar to Welcome to Corneria, only this happens within a single conversation.

Compare But Thou Must!, Parrot Exposition. Common in Dialogue Trees.

open/close all folders
Action
Action Adventure
Adventure Game
Advertisement:
Horror Game
Platform Game
Role-Playing Game
Non-Video Game Examples
Would you like to read all of that again?
Yes ←
No