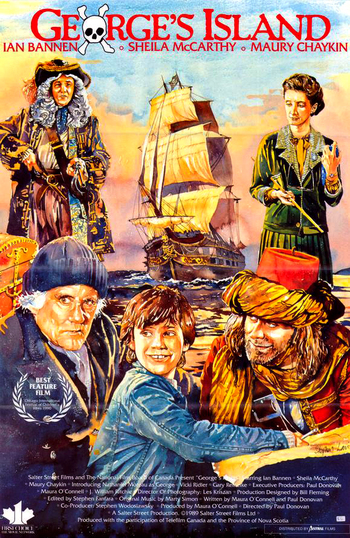 George's Island is a Canadian family adventure film. It was shot in and around Halifax, Nova Scotia.

Ten-year-old George (Nathaniel Moreau) lives in a dilapidated home near the Halifax Harbour with his grandpa Captain Waters (Ian Bannen). Captain Waters is a wheelchair-bound former sailor. He is fond of telling George ghost stories. He volunteers an old story about the time he saw Captain Kidd's ghost out in Halifax Harbour. When George learns in school about Kidd's supposed buried treasure out on nearby George's Island, he volunteers the story, and is punished by meddlesome teacher Miss Birdwood (Sheila McCarthy). Miss Birdwood believes that the root of George's outburst is "trouble at home." She launches her own sneaky investigation to find out the truth. When she discovers that Captain Waters has a fondness for grog, she reports the family to Mr. Droonfield (Maury Chaykin) at Child Services. While Mr. Droonfield determines a course of action, George is temporarily placed with a foster family, the Beanes (portrayed by Brian Downey and Irene Hogan) who keep him locked up in a basement cell. On Halloween night, George and the Beanes' other adoptee, Bonnie (Vickie Ridler), escape with Captain Waters and head for safety on George's Island. Miss Birdwood and Mr. Droonfield give chase, but they accidentally awaken the ghosts of Captain Kidd (Gary Reineke) and his men, who think that the intruders are after their chest of gold.