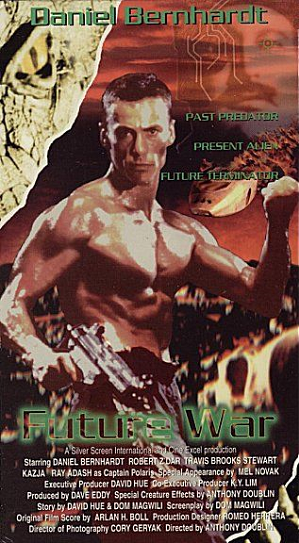 "From the future traveled a master race of cyborgs. They made abductions from Earth's past. The dinosaurs were trained as trackers. The humans were bred as slaves. Now a runaway slave escapes to a place his people call heaven... we know it as Earth."
— Opening Monologue
Advertisement:

If someone were to combine The Terminator and Jurassic Park, with a fraction of the former's budget, while throwing in religious overtones just to spice things up a bit, you'd get something close to Future War, a direct-to-video gem (for a given value of "gem") featured on a season ten episode of Mystery Science Theater 3000. Similarly, Best of the Worst featured it in an episode, where they considered it one of the best bad movies they'd ever seen, charmed by it's infantile script and ultra-low budget.

The story concerns "the Runaway," a slave who escapes his cyborg masters' spaceship and crash-lands just off the coast of California. Two cyborgs and a pack of killer dinosaurs (who do not in any way resemble cheaply-made puppets) are dispatched to recapture him. The Runaway kickboxes one of the cyborgs to death and takes down a dinosaur puppet, but is then unceremoniously hit by a car driven by Sister Ann, a hooker/ganger/druggie-turned novitiate nun. Ann takes him back to her home, a half-way house inhabited by overweight men, and nurses the Runaway back to health. With him choking her and all, they seem to be hitting it off, but their growing bond is interrupted by a dinosaur puppet attack that claims one of Ann's friends.

Ann and the Runaway make a break for it, and wander around the streets and ride on a train for a while. Ann's having second thoughts about the whole nun thing, but the Runaway quotes verses from The Bible, which mostly seems to confuse her. Then the pair are picked up by cops and tag along as a SWAT team combats another one of those dinosaur puppets. The heavily-armed specialists get their asses bitten off until the Runaway takes down the threat with a stab to the jaw, and in gratitude, they haul him back to the police HQ for questioning. Fortunately, the remaining cyborg tracks the Runaway there, and our kickboxing hero is able to escape in the carnage, thrashing the cyborg in the process.

Our heroes reunited, Ann calls in some favors and enlists the aid of her former clients/gangmates/customers to raise a small army to combat the dinosaur puppets. Since said puppets are known to congregate near water, the last half-hour or so of the film takes place in what is meant to be a water treatment plant, which the gang blows up after suffering heavy losses. At the end, Ann's final vows are interrupted by the second cyborg showing up for one last kickboxing match, but the good guys win, Ann becomes a nun, and her halfway house "scores" a new counselor.

Not at all to be confused with the incredibly obscure film Future War 198X. Or the point-and-click adventure Future Wars.