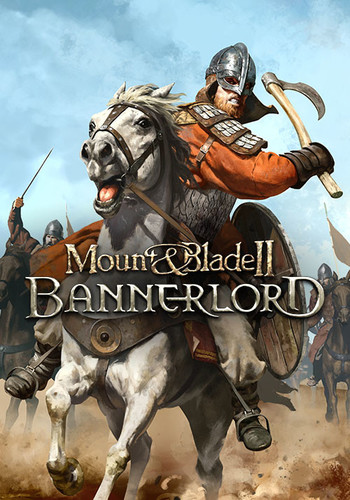 Mount & Blade II: Bannerlord is a Sandbox Action-Strategy RPG developed and published by TaleWorlds Entertainment and Prequel to Mount & Blade: Warband. After a 10-year development period, It was released in Early Access on March 30th, 2020.
Advertisement:

Set in the medieval-inspired continent of Calradia two hundred years before the events of the first game, the player is put in the final days of the doomed Calradic Empire. Without an official heir being declared by the late emperor, the Empire is torn asunder by civil war as three different factions fight to crown their candidate. Taking advantage of its divided state, opportunistic foes gather to tear the Empire apart. Canonically, the Empire falls and is replaced by the factions seen in the original M&B, but the player is free to alter the course of history as they see fit.