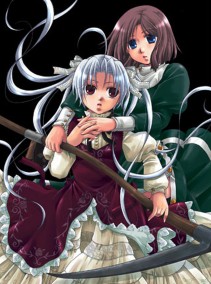 Angela looks like a little girl but is an immortal who longs to die so her soul can reach the afterlife. Her partner is Meg, a 17 year old Anglican nun who has holes in her memory. Angela is very close to Meg and says that she can live only as long as Meg needs her.

Together, they belong to a mysterious organization whose mission it is to hunt demons: creatures that possess humans as well as prey on both humanity's corruption and innocence. An army of them, led by the demon lord Gilles de Rais, is waging war against humanity. What sacrifices will be called upon humanity for this war? Can this war against the demons even be won?

Tetragrammaton Labyrinth is a violent gothic tale which ran in Comic Gum from 2005 to 2007, and was compiled into six manga volumes. The story has been translated and published into English by Seven Seas Entertainment.