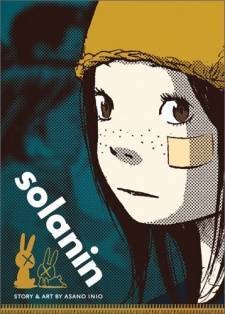 Meiko Inoue has been living her life as an office lady since she graduated from university. She goes to work everyday to see her annoying coworkers and boss and comes home to see her boyfriend who still doesn't have a proper job. Fed up with this schedule, Meiko quits work one day, figuring that she and her boyfriend Taneda can get by on her savings for at least a year. However, she learns that life with unrestrained freedom is incredibly boring and that finding direction in life is hard.

Solanin is a one-volume manga by Inio Asano about the life of average twenty-somethings, inspired by Asano's experience after leaving university. There isn't much of a plot and the characters aren't Big Damn Heroes or any kind of heroes really, but normal people. For this though Solanin is charming. It feels real.

There is a live-action movie, released in 2010. A digital-only follow-up, solanin: an epilogue, was released in June 2018.