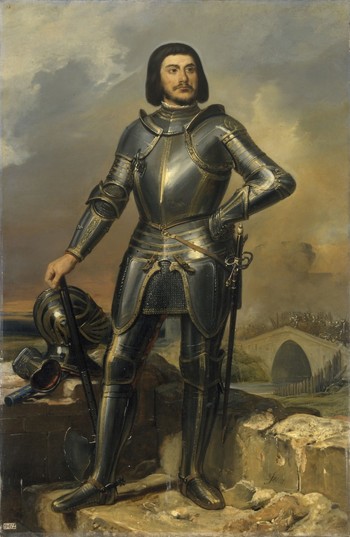 Gilles in his better days before things, along with himself, go to Hell.
Advertisement:

For a lot of people, Gilles de Rais has been known for several identities: French noble, soldier, companion of Joan of Arc, presumed basis of "Bluebeard", serial killer and child rapist (maybe). In other words, he's one of the most infamous cases of Fallen Hero in history.

Born on an unknown date in the year 1405, Gilles was an intelligent child, showcasing cases of being a sophisticated and overall upstanding man. When he came of age, he received his lessons in the military and enlisted as a soldier, rising up in ranks and eventually becoming one of the chief generals of the French army. Accompanying him was Joan of Arc. Despite the girl's upbringing, Gilles accepted her just fine and they fought as comrades-in-arms, successfully winning on France's behalf during the Siege of Orleans of The Hundred Years War.

Unfortunately, for unknown reasons, Gilles was not present when Joan was tried by the English and executed. It was around this time that one of Gilles's vices was discovered: excessive spending when it came to riches and treasures. However, it was known that he did not do it out of self-indulging purposes. But it was something that would become his downfall.

After the execution of Joan, Gilles retired from the military and decided to use his vast fortunes for his personal project: The construction of a grand chapel and a 20000-lines worth theatrical spectacle based on his war experience with Joan. These projects pushed Gilles's fortunes to the point that he was on the verge of bankruptcy while he still couldn't let go of his more extravagant lifestyle, selling his properties one by one. Eventually, his family members and the pope decided that enough was enough, and they barred Gilles from spending further fortunes, armed with official edicts.

In his desperation, Gilles then turned towards the occult. With the help of a certain clergyman named Francois Prelati, Gilles came across a book that would allow him to summon a demon who was called 'Barron'. Gilles tried summoning this Barron three times within his own castle, Chateau de Tiffauges, but none of them yielded any result, frustrating Gilles even more. However, it was then the horrific truth behind Gilles's actions were revealed.

The method to summon the demon required sacrifice, or so Prelati suggested, and the sacrificial item was supposed to be... blood of children. For that, Gilles resorted to really drastic and evil methods: He would invite young boys to come to his castle and become his page, grooming them to be good adults... but also sexually assaulting them before eventually murdering them in very gruesome ways. His cousin Gilles de Sillé and his servants Étienne Corrillaut, known as Poitou, and Henriet were his accomplices. There were many many victims of his actions, making him one of the earliest deranged Serial Killers in history, predating even Jack the Ripper. The exact number of victims is unknown as he had the bodies burned or buried. Most say it was between 100 and 200, though some claim it was over 600.

Eventually, Gilles's actions were found out and he and his accomplices were put on trial, where they did confess all their depraved actions and were rightfully sentenced to death. He was hanged on October 26, 1440. His Last Request to be buried in the church of the monastery of Notre-Dame des Carmes in Nantes was granted. His only daughter, Marie, turned the spot where he was executed into a memorial that was eventually regarded as a holy site, but it was destroyed by rioting Jacobins during The French Revolution in the 18th century. While France would be free from one depraved Serial Killer, years later, some people put doubts in the trial that ended Gilles's life, citing theories that perhaps Gilles was innocent, only falling victim to propaganda from the Catholic Church and ganged up to the point that he died and was the perfect slander target. And another popular theory was just how much influence Joan of Arc had on him; after all, Gilles's Start of Darkness can be speculated to begin somewhere after Joan's unfair execution, had Joan lived on or at least died more fairly, perhaps Gilles wouldn't have been pushed to the desperation that led him to become the Serial Killer he's known as.

Just how much he was 'innocent' was still a source of hot debate. However, Gilles's time as a mass murderer seems to have eclipsed his good deeds, and thus he is now mostly remembered as a depraved child-murderer and one of the most infamous Serial Killers in the history of Europe.