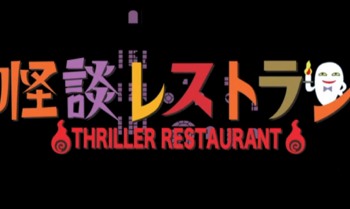 Not quite.
"Welcome to Thriller Restaurant. I am the Ghastly Garçon, the manager of this establishment... We specialize in dishes that send shivers down your spine. Here is tonight's menu..."
— The Garçon
Advertisement:

Also known as Kaidan Restaurant, this anime is about a series of horror stories told by ghosts in a restaurant, which tend to focus on the same group of kids: Anko, Reiko, and Shou.

The norm is three stories per episode, all organized like the many courses of a meal: the appetizer usually deals with a story of the supernatural (ghosts, possessed TVs, whatever); the main course is similar, but longer and almost always with a twist; and the dessert is a short and sweet urban legend, almost always containing a vague moral (Whether this works or not is up to you).

The manager of the restaurant, The Ghostly Garçon, presents the episode, while a whole host of spooks from Japanese mythology is responsible for the menu.

Essentially a sort of Tales from the Crypt for kids.