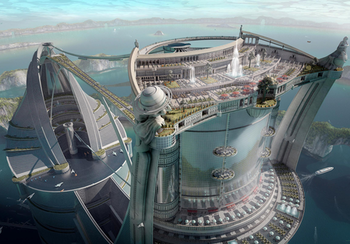 Arcology is a concept of architectural design in which an ideal city is contained within one immense vertical structure, thereby reducing wasteful consumption and preserving the natural surroundings. A community designed with the principles of arcology is itself called an arcology and typically has the following attributes:

Imagine a skyscraper. Every five or so floors, there is an entire floor dedicated to the inner workings of the floors above it. This is called a deck. The deck level houses all power lines, plumbing mains and anything else that needs to work properly for life to be livable with all the modern conveniences. Now make the skyscraper cover the ground area of a small city or a large town and realize that the decks number in the triple digits. There's the ideal description in a nutshell.

The name of the game here is self-sufficiency. The second attribute above links to the Closed Circle page because the materials required to keep the systems of the building going cannot leave. These processes include food production, waste recycling and environmental refinement (air conditioning and such). People can, in theory, come and go as they please, but the idea is that they don't need to leave. Energy, however, is generally allowed to enter from the outside in the form of sunlight, wind power and such. It's worth mentioning that some of the truly huge mega cities in fiction are made up of "arcoplexes", or residentially, commercially, or industrially specialized arcologies that link to each other to create a unified, futuristic ecosystem. After some application of Fridge Logic, City Planet settings almost have to qualify as gigantic systems of arcoplexes; otherwise they wouldn't function.

This trope tends towards either extreme hard or soft sci-fi, since the full explanation is pretty complex. It's either going to be explained in detail, or it's going to be handwaved. Depending on who we ask, we may or may not currently have the technology required to make an arcology work in the real world. What is certain is that we don't yet have the political pressure and economy of scale to build one with any reasonable payoff; with current population densities, such a project would be Awesome, but Impractical, thus a fully functional arcology in fiction often requires some Applied Phlebotinum until Technology Marches On comes into effect.

Arcologies appear most often in speculative fiction that tend toward the cynical end of the spectrum, since they are essentially futuristic paradises with a bit of science to back up their justified existence and functionality, and Utopia never holds up under scrutiny. They often appear in video games set After the End or 20 Minutes into the Future, Cyberpunk stories, and most often feature heavily in stories that rely on an environmental or class warfare aesop.

Because they are so insular and answer all of humanity's material needs, arcologies are a great setting for a Wretched Hive masquerading as a Shining City, if not just playing the Layered Metropolis disgustingly straight. If the arcology is actually a Shining City, and a sympathetic character hails from it, it's probably going to be destroyed anyway. Broken arcologies tend to be the breeding ground for all sorts of nasties, too, since they are no longer fit for human habitation, there's a chance at least some of the sustenance systems still work, and there are at least millions of hiding places. In some Cyberpunk settings, an arcology may be a Shining City in the middle of a Wretched Hive, the arcology's walls forming a neat divide for Urban Segregation.

If the arcology has space engines, it's a Generation Ship. Shares blurred lines with the Mega City, which need only be huge, but sometimes an example of one is an example of both, especially the arcoplex variation. Hive City is the supertrope; all arcologies are hive cities by definition, as they consist of either a single colossal building or several overlaid and interconnected ones, but hive cities do not need to be self-reliant like arcologies are. Contrast Hub City, which offers everything you need but a place to call home. Citadel Cities that also qualify as arcologies function extremely well under siege conditions, since dwindling supplies are no longer an issue. Compare and contrast with Layered Metropolis, City on the Water, City in a Bottle, Underground City, Skyscraper City, and Domed Hometown. Even though most of the tropes above are sub-tropes of the Mega City, technically the Arcology is not, since one can exist inside a city without actually being one, itself, even though it usually works out that way. Lastly, see Shining City, which is what an arcology is trying to be from an ecological standpoint, whether it succeeds or not.