Radio / Tales from the Afternow 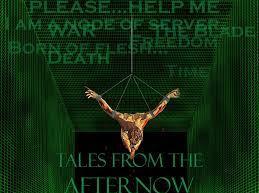 Light your candles, and may SERVER protect us all.
— Independent Librarian Dynamic Sean Kennedy the Sixth
Advertisement:

Welcome to the future, ladies and gentlemen - a future set some time after now. Government as you know it is a distant memory. In this world, everything is copyrighted, licensed, and strictly regulated by a multinational corporate agency known as the World Licensing Organization.

If you're lucky, you were born in a corporate arcology, where - in exchange for your loyalty to the company that owns the arcology - you will receive a standard education, the appropriate amount of nutrition, and a tolerable job. If you're unlucky, you were born on the fringes of an arcology, in a toxic wasteland populated by scavengers, organ pirates, and assorted criminals and terrorists.

And if you're extremely unlucky, you got kicked out of one of the corporate arcologies.

In this world, unlicensed information is pornography, sharing is theft, books are banned, breaking your licensing agreements is punishable by death, and even time itself is copyrighted.

And yet, in the midst of this Crapsack World, there exist anomalies. The best-known - and most wanted - of these anomalies is a man known as Independent Librarian Dynamic Sean Kennedy the Sixth. Utilizing hacked recording equipment and illegal technology, he broadcasts information back in time to the present day, so that the people in his past can at least prepare for his future.

These broadcasts are the Tales from the Afternow.

Please note: by reading this page, you may have violated your Listener's License and any associated Creativity Permits, and may be subject to various sanctions up to - and including - mandatory recycling.

Rant Media, each one of which is approximately an hour long. Each "episode" focuses on a different aspect of the Afternow — either something that currently exists in the Afternow, or an event in the past that shaped the Afternow and the people living in it.

(Side note: Only the first two seasons are the actual Tales from the Afternow, according to the creator. The third season has been nicknamed "The Witch-Hunter Chronicles".)

Tropes utilized by this work include: