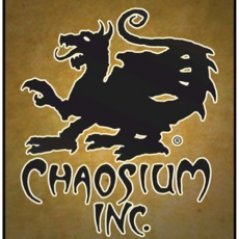 Chaosium Inc. is one of the oldest role-playing game publishers still in existence. It is best known for its Call of Cthulhu games.

Greg Stafford started the company in 1975 to publish his board game White Bear And Red Moon, and in 1978 it published Steve Perrin's roleplaying game RuneQuest. In 1980, the company incorporated as Chaosium, Inc., and Stafford and Lynn Willis simplified the RuneQuest rules into the Basic Role-Playing system, which would form the basis for Chaosium's later role-playing games like Call of Cthulhu.

In 1983, Chaosium entered a licensing agreement with Avalon Hill to produce a third edition of RuneQuest. It wasn't financially successful for Chaosium, but after Avalon Hill brought Ken Rolston on board a number of well-received products were produced in a "RuneQuest Renaissance".

Stafford resigned as the Chaosium president along with lead CoC designer Sandy Petersen following the failure of the CCG Mythos in 1998, and the company split into a number of successor companies, each focusing on a few of the Chaosium products. Part-owners Charlie Krank and Lynn Willis remained at Chaosium to continue Call of Cthulhu.

In 2015, the problematic Kickstarter campaign for the 7th edition of Call of Cthulhu led Stafford and Petersen to return to an active role in the company, and Crank subsequently left. Later that year, Moon Design Publications became part of Chaosium, and the company was once again the licensed publisher of RuneQuest, HeroQuest, and other products in the same universe, alongside Call of Cthulhu.

Titles produced by Chaosium include: