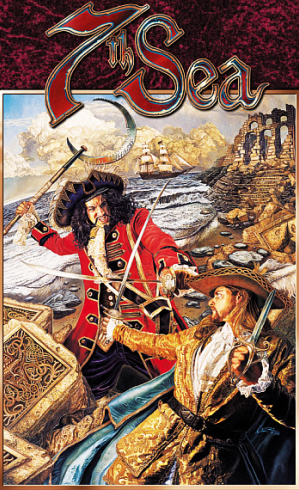 What began in Theah long ago 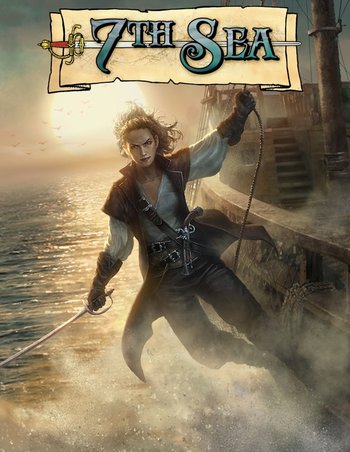 Sails to new shores!
Welcome to Théah, where a cutting remark can be as sharp as the sharpest blade.
Advertisement:

7th Sea is a tabletop role-playing game and related CCG created by AEG after Legend of the Five Rings became a success. The game's central setting is Théah, an alternate version of Europe during the 17th century, bordered by the Crescent Empire, an analogue of the Ottoman Empire, and Khitai, an analogue of Asia. Théah is composed of several theme park versions of various major European countries and cultures. The countries vie with each other for political and economic dominance, while pirates sail the seas in search of adventure and treasure. The world is based very much upon the varied tropes common to swashbuckling and pirate stories.

The RPG is very notable for its No Historical Figures Were Harmed versions of quite a number of NPCs described in the sourcebooks. People with only a cursory knowledge of European history can name at least two or three of the major NPCs' real-life counterparts. Those who have more background in history can find many more, as well as note the places where Wolfrond von Hazel was a Syrneth Spy.

In 2015, John Wick Presents, run by John Wick, part of the original development team for 7th Sea, bought the publishing rights from AEG. They announced plans for a second edition that would reboot the game, changing up the system and setting, making some changes to the established countries, and expanding the 7th Sea world, now named Terra - Aztlan (Central/South America), Wabanahkik (North America), and Ifri (Africa) were added to the world map, and the Sarmatian Commonwealth (the Polish Lithuanian Commonwealth) was added to the map of Théah.

A Kickstarter to fund the second edition line

ran in February/March 2016, which smashed through its initial $30,000 goal for the corebook and The New World sourcebook (for Aztlan) in seven minutes, went on to fund ten additional sourcebooks and a considerable amount of other stuff (novels, maps, etc.), and ultimately became the first tabletop RPG Kickstarter to reach a million dollars, with a final total of $1.31 million.

A planned second 7th Sea line, 7th Sea: The East, was announced during the Kickstarter, focusing on Cathay and other Asian-analogue countries, with its own independent corebook. Beta-test rules were given out for free at GenCon 2017. The Kickstarter

for this locale ran in October/November 2017. The Quickstart guide has been publicly released online.

The RPG's first edition features a system similar to Legend of the Five Rings in mechanics, but distinct in that the PCs are almost explicitly given a mild form of Contractual Immortality. PCs can only be killed off if the GM is specifically setting up such a possibility through the plot's villain, or if the characters fall victim to the chunky salsa rule. Players are encouraged to come up with utterly outrageous plans of action and are given rewards both for implementing these ideas and for impressive role playing using the Rule of Cool as a guide. The RPG setting enjoys being quite over the top when encouraging ideas for characters and stories.

The RPG's various splats are the country of origin a character hails from. In addition, a character can join one of a number of secret societies whose origins, goals, and knowledge are made available in additional RPG supplement books.

Like Legend of the Five Rings, 7th Sea was adapted for Dungeons & Dragons 3rd Edition under the name Swashbuckling Adventures.

The CCG had the players choosing a faction which represented a pirate crew or a country's naval power, pitting two ships against one another in combat. Players would attempt to hire crew, chase down their opponent's ship, and then attack with ether cannon or boarding based attacks.

Like Legend of the Five Rings, the metaplot was supposed to be steered by players' choices in the CCG tournaments and in RPG supplements distributed through the quarterly newsletter sent to game masters who had paid a registration fee to AEG.

The first edition's main story arc only spans about a year and a half of time, unlike its cousin, Legend of the Five Rings, which has gone through several lifetimes' worth of game plot. The major storyline elements were quite varied, with every country and major faction of the world having a part in the story.

The CCG and then the RPG were discontinued with little fanfare, though the CCG had a final expansion set published online free for download and printing while the RPG managed to get a final supplement which included a timeline for the major plot arcs which were never resolved in the metaplot.

Due to the success of the Kickstarter and the subsequent expansion of the game's universe beyond Theah's shores, the game's splats are no longer based on individual nations, but entire regions. Eastern and Western Theah, Aztlan, The Pirate Nations, Ifri, and others all introduce new Hero and Villain options while providing Fantasy interpretations of historical cultures. The meta narrative has become Lighter and Softer while not shying away from serious topics. Women and LGBT persons are now commonplace- the Fantasy version of the Barbary States is ruled by a Transgender woman. Darker and Edgier topics are still present as well- there is a lucrative Slave Trade moving Ifrian war refugees to the Atabean Sea, and women in Vodacce continue to be kept in cultural bondage. The Syrneth are mentioned in almost every book, but not nearly as much detail is given about them as in First Edition. Cathay exists but is a mispronunciation by Theans- it is pronounced Khitai and is not one nation, but an entire continent analogous to Asia.

The game no longer uses a modified D&D rule set, instead utilizing a unique d10 based system that eschews the traditional "I deal 8 damage to the enemy with my pistol" for a more narrative style, "I fire my pistol, blow up the powder magazine and create a very loud distraction." Likewise, the players write the metaplot along with the GM- they level up by writing the story beats for the next chapter of their character's story and provide the information to the GM ahead of time, working together to craft the narrative.

Rather than a Collectible Card Game, JWP has tried to launch a board game that tells the tale of the War of the Cross. A mixture of Diplomacy and Risk, as of August 2018 the Kickstarter has been canceled twice after nearly hitting its initial goal.

The rest of the game world of 7th Sea provides examples of:

No Banter, No Barter, No Quarter.