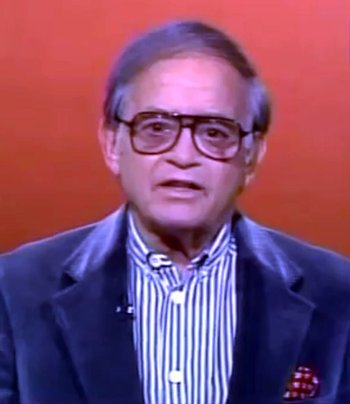 "His shows should be required viewing material for anyone looking to get into directing game shows."
— From Variety.com

Paul Alter (March 11, 1922 – June 11, 2011) was director and producer on some of the most iconic and long-lasting Game Shows in television history.

Alter was born in Chicago, Illinois, and started to work in television in the 1950s, when he studied piano with Teddy Wilson, from the Benny Goodman Quartet. As a talented musician, Alter put his skills to use by composing the famous 1969 theme music for To Tell the Truth. He graduated from NYU and the Yale School of Drama. He was a key figure at Mark Goodson Productions, specialized in game shows.

Starting in the early days of television with Beat the Clock in 1950, this was his first job as a game show director. After that Paul Alter started his long lasting association with Mark Goodson-Bill Todman Productions, where he worked on many of their shows including To Tell the Truth, What's My Line? and I've Got a Secret. At Goodson-Todman, Alter helped created more than 60 game shows from 1956 to 2000 and directed almost all of the pilots for the company’s shows, even if another director went on to helm the series.

Over the course of a career that spanned five decades, Alter worked on some 60 game shows and other productions, but he also did work outside the TV game show arena like editing and scripting episodes of the 1950s crime drama Man Against Crime, served as an occasional editor to director Sidney Lumet on the TV series Danger, and was in charge of some episodes of The Perry Como Show. In 1972, he produced Simon Gray’s Broadway show Wise Child.

Apart from his television work, Alter gained attention with a noteworthy lawsuit in 1992 against Disney, claiming several similarities between Disney’s movie Honey, I Blew Up the Kid and his treatment which he had written years before. In his suit, Alter listed 17 areas of similarity between his work, which he had submitted to Disney in the late 1970s, and the 1992 movie, a sequel to 1989's Honey, I Shrunk the Kids. His case went to trial in 1993, and after the jury sided with Alter, Disney settled with him for $300,000. Alter has won two Daytime Emmy Awards, one in 1982 for Family Feud and the second in 1996 for The Price Is Right. Overall he has had 14 nominations. This Emmy-winning game show director directed the original version of Family Feud which ran on ABC from 1976 to 1985. He continued to direct the show after it was revived in 1988, and directed that version as well until 1990 when he left the show and went on to direct the infamously-troubled 1990-91 revival of To Tell the Truth.

Alter directed both versions of The Price Is Right; he directed the original NBC-ABC version through its entire run, and directed the CBS version from 1986 to 2001, replacing original director Marc Breslow, who had been relieved of his directing duties due to repeated disputes with host Bob Barker.

He retired after his departure from Price in 2001. This allowed him to go back to his music background and late in life, at the age of 87, he composed the music and lyrics for the festive season album The True Spirit of Christmas, recorded by Pat Boone. For over 40 years he was married to Shirley Burrows-Alter. Later on he married his second wife Lorraine Cole-Alter. Paul Alter has three daughters, four grandchildren and four great-grandchildren. He died of natural causes on June 11, 2011 at the age of 89 in Los Angeles, California.