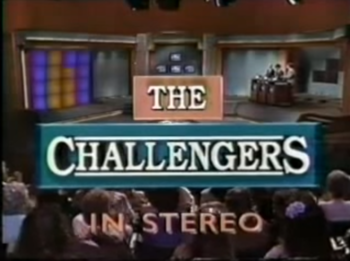 Are you ready to step up to the challenge?
Advertisement:

Revival of the 1969-74 NBC current-events quiz The Who, What, or Where Game hosted by Art James, now a syndicated series with three players (one a returning champion) and Dick Clark at the helm (co-producing as well alongside creator Ron Greenberg and Buena Vista Television). While the basics of the game remained the same through the run, certain aspects of the game were tweaked along the way.

Each show was introduced by announcer Don Morrow giving the date (e.g., "Today is Monday, September 3, 1990") and began with a 60-second rapid-fire current events question round called the "Challengers Sprint", with $100 per correct guess and $100 deducted for an incorrect guess. (This was later changed to just one toss-up question to decide who started, but the Sprint eventually returned.) The contestant with the most money after the Sprint got to select from a board of questions. Each round had six categories of three questions about current events and popular culture; each question was worth $150, $200, and $250 (later $100/$150/$200).

The contestants secretly chose which question they wanted to answer. If a question was chosen by one player, they were read the question with cash added or subtracted depending on if a right answer was given. If two players selected the same question, Clark read it toss-up style, with the first to buzz-in getting to answer. (For some episodes, if the buzzing contestant failed to answer correctly, Clark gave the other contestant a chance to answer if they wanted to. In others, he just gave the answer and moved on.) If all three contestants chose the same question the values doubled, with the player answering correctly first getting to answer one or both of the remaining questions for extra cash. Two rounds of six categories were played, with second round values doubled. See below for how things progressed after that.

The Challengers is notable for being one of the very few TV shows to prominently display each episode's airdate during the open and on a screen behind Clark, primarily because episodes were taped close to their airdate to keep with current events. However, this feature was dropped during their sweeps-period tournaments, so that they could be rerun during the summer hiatus without being literally dated.note (Technically, there was no hiatus, as the show lasted only one season.)