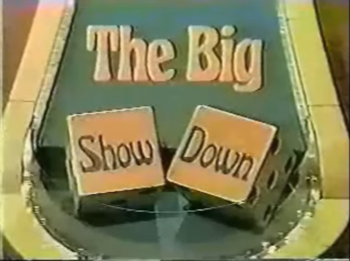 Let's roll those dice! No wait, they're too big.
Advertisement:

The contestant in control after a one-point tossup chose one of six categories for a tossup question worth that many points. The main strategy was that the Payoff Point had to be met exactly, and no player could choose or answer a question that would cause them to exceed it; this added a layer of intuitive counter-blocking between the players. Following the second Payoff Point, six new categories were introduced. This round ended with a 90-second Speed Round, during which every Payoff Point following the current one was worth $100; once time expired, the contestant in third place was eliminated.

The two remaining contestants played Final Showdown for a Payoff Point of 7, which awarded $250. Three categories were played with point values being from 1-3. First to reach the Payoff Point became champion and played the bonus round.

Showdown debuted on December 23, 1974 (as did its sister show The Money Maze) and lasted a mere six months against NBC's popular series The Doctors, ending on July 4, 1975. Despite its scarcity and obscurity, it is a cult classic revered by those who have seen it.