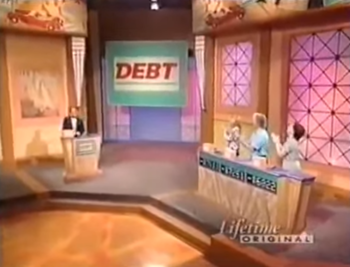 The set and logo from the first season.
"Drowning in a sea of bills? Then it's time to play Debt! The game show where three debt-laden Americans just like you compete to have us pay off all of their bills and go home with nothing!!"
— Opening Narration, as read by Wink Martindale
Advertisement:

Debt is an American Game Show hosted by genre veteran Wink Martindale which ran on Lifetime from 1996-98, and could be argued as the Ur-Example of the show that revived the whole genre after an early-1990s swoon. It got good ratings but was canceled after two seasons when it was learned that some half of those ratings came from viewers who were men.

Three contestants began the game, each with fairly sizable amounts of debt (ranging from $6,000 to $10,000); the three contestants' debts were averaged to the nearest dollar for parity. The object of the game was to eliminate your debt by answering pop culture questions, each worth "negative dollars" (i.e., -$100) that would subtract from your debt.

We'll be back next time with three new big spenders, and we'll do the best we can to get 'em out of... DEBT!