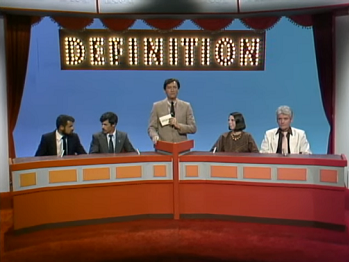 A well-known Canadian Game Show created by the same people who created The Newlywed Game, which ran from 1974 to 1989 on CTV, and was produced at the network's Toronto station, CFTO.

Much like Wheel of Fortune (which debuted at around the same time), Definition was a game show based on Hangman, where two teams of a celebrity and civilian player competed to solve such a puzzle. Both teams alternated guessing letters that were in a puzzle on a board (accompanied by a crossword-style hint); one team member had to "give away" a letter which wasn't in the puzzle, after which their teammate had to "take" a letter that was in it. If both teammates succeeded, they were given a chance to solve the puzzle. If not, they lost their turn; in addition, if the given-away letter was in the puzzle, the opponents got a free guess. The first team to solve two puzzles (later changed to three) became the champions and played a bonus round.