Series / Deal or No Deal

The original American Deal or No Deal logo. 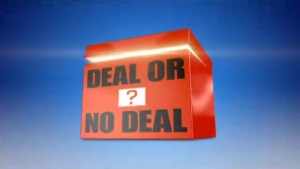 The British Deal or No Deal logo.

The new American Deal or No Deal logo.
"We've had game shows based on card games. We've had game shows based on pub quizzes. But never have we had a game show based on the Copenhagen interpretation of quantum mechanics. Until now... In other words, my suitcase contains the financial equivalent of Schrödinger's Cat: a sum that exists in a theoretical superposition, being both substantial and meager until I open and observe it, thereby assigning it a quantifiable value in the physical universe."
—Charlie Brooker
Advertisement:

A popular Game Show; a game starts with a certain number of numbered Mystery Boxes (usually a briefcase or cardboard box/paper package, manned by either potential contestants or identically-dressed models) containing various amounts of money. A contestant sets aside the box they think the top prize is in, and then begins to open the remaining boxes to reveal their contents. At various intervals, the Banker makes offers to buy the box from the contestant instead of continuing, with values based on the probability that it could contain the top prize or an otherwise high amount. Each offer is calculated based on average of all the values still in play at that point, starting with a small percentage of it in early rounds and increasing as the game goes on. Keep the big prizes in play, and the offers go up. The game ends when a deal is made, or the contestant sticks it out to the end — where they can either keep the box they chose earlier, or switch it for the last remaining one.

The game originated as the Bonus Round of the Netherlands' Postcode Lottery's game show Miljoenenjacht ("Hunt for Millions", where the winner of a multi-stage elimination quiz plays the game). While Miljoenenjacht as a whole was sold to several countries, the briefcase game was later sold internationally as a standalone format, known in English-language markets as Deal or No Deal. Daily versions of the format began to premiere in European countries such as Italy, and Australia, in 2003. They had a lighter, more casual atmosphere than the original Miljoenenjacht; the boxes were manned by a persistent contestant pool, with the episode's contestant determined by either a random selection, or a preliminary quiz round. Sometimes, each box was designated to represent a contestant from a specific region of the country. A British version (hosted by Noel Edmonds, a former DJ and Saturday Night presenter whose career had been on the skids) debuted on October 31, 2005 and ended in December 2016; it was such a hit that a Saturday primetime show was added. The UK version has 22 boxes, each manned by a possible future contestant (they're sequestered together when they're not filming to encourage rapport during the game), with the top prize being £250,000.

On December 19, 2005, NBC premiered a U.S. primetime version hosted by Howie Mandel, with 26 briefcases containing values ranging from 1¢ to $1,000,000, and a glitzy atmosphere. It was an instant hit, eventually leading to promotional tactics such as airing it multiple times per-week, in-game gimmicks (such as increased top prizes and literally trying to force a win by adding more million-dollar cases to the board), and also became prone to padding the game with excessive personal stories, celebrity guests, and other unnecessary content. The primetime version aired its final episode on May 18, 2009. A half-hour syndicated version debuted in September 2008 and essentially cut out all the fluff while adding various elements of the European versions, with a top prize of $500,000. Gimmicks were still used, however, and the 22 contestants (and their replacements) only stayed on for one week. Ratings fell sharply during the second year, and the show wrapped production around midseason. The series was put out of its misery again, this time for good, on May 28, 2010; repeats continued to air through September 10 in syndication, and September 28 on MyNetworkTV.

In 2018, NBC's sister financial news channel CNBC (whose primetime lineup features business and finance-themed reality and documentary programs, and had also aired reruns at the show's peak) announced that it would revive Deal on December 5 (with NBC itself airing a Christmas Episode as a preview on December 3), with Howie Mandel returning as host. While otherwise identical to the original series (but with refreshed aesthetics and a female Banker), this version gives the player one chance per game to counter the Banker's offer with a higher value. If the Banker accepts the counter-offer, the player receives the amount he/she named and the game ends. This version ran for one season, from December 2018 to August 2019.