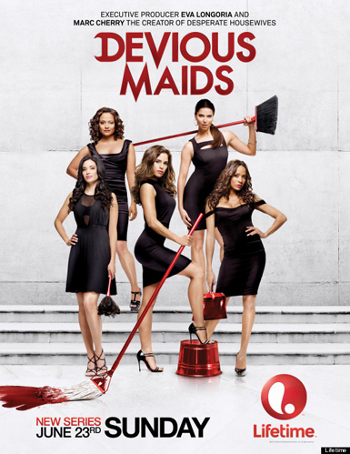 Taylor: You don't have an accent.
Marisol: Should I?
— "Pilot"
Advertisement:

Devious Maids is a Prime Time Soap airing on Lifetime created by Marc Cherry with Eva Longoria and Cherry serving as two of the executive producers (and in the case of the latter, director of the season two premiere). Based on the Mexican telenovela Ellas son la Alegria del Hogar, the series is about a group of group of Latina maids working for the eccentric Beverly Hills elite. The series featured an ensemble cast led by Ana Ortiz as Marisol Suarez, Dania Ramirez as Rosie Falta, Roselyn Sánchez as Carmen Luna, and Judy Reyes as Zoila Diaz.

Shortly after the series was announced and a promotional ad was released, controversy erupted over the perceived stereotyping and racial implications of the Latina characters as maids and Spicy Latinas. Eva Longoria has come forward to defend the show, saying that the portrayal of the main characters are neither racist nor stereotypical.

That being said, the show seems to explores Latina stereotypes about as much as it does any other trope; it plays with them, challenges them at times, but is mostly focused on being a fun, soapy satire and Spiritual Successor to Desperate Housewives.