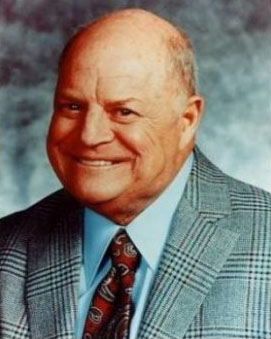 It would be an insult not to be insulted by him!
"You can't study comedy; it's within you. It's a personality. My humor is an attitude."
Advertisement:

If you hear the words "hockey puck" and think of ice hockey, you're a hockey fan. If you're a comedy fan, the visage of "Mr. Warmth" himself, the world's most beloved insult comic, will pop into your head... even if no one's quite sure how or why "hockey puck" came to be a put-down. What we do know is that Don Rickles had a unique gift for generating riotous laughs by making fun of his audience's weight, height, gender/sexuality, economic status, looks, and ethnicity without actually hurting any feelings... or suffering any broken bones.

The trick was actually no trick. Rickles was not some natural-born verbal bully who figured out a way to get paid for what he was already doing for free. The road that took him from shy child (with a beloved but dominating mother) to a true artist of the put-down was long and hard, and it pretty clearly concealed a heart full of mush. How else can you explain the near-universal fondness for a man who, dubbed "the Merchant of Venom", teased everyone from short-tempered show business legends to actual royalty, all of whom were proud to be skillfully dissed?

Born May 8, 1926, Donald Jay Rickles left his wartime service in the U.S. Navy in 1946 and headed not for the nightclubs of the Borscht Belt, but straight for the prestigious American Academy of Dramatic Art. Serious about the craft of acting, genetics determined that the bullet-headed Rickles would never be a leading man, and years of mostly fruitless effort proved that the path to a career as a character actor was going to be long. Comedy seemed to be a quicker, if no less difficult, path. Over the years, Rickles discovered that traditional gags didn't really work for him, but "working the audience" did.

His democratically fearless way with the insult paid off famously when he spotted Frank Sinatra (pretty much the world's biggest star during the late 1950s) enter his club. Sinatra was the Russell Crowe of his day, but Rickles knew that his formidable mother was a good friend with the superstar singer's mother, so the all-but-unknown comic shrewdly gave Sinatra the Rickles treatment — "Make yourself at home, Frank. Hit somebody!" Fortunately for everyone, Sinatra laughed and became his most powerful fan, recruiting notables to pay for the privilege of being insulted by the prematurely-balding wisecracker.

Rickles' fame grew steadily until he became a true household name, lovingly insulting targets that included England's Princess Margaret, and generating huge laughs with numerous appearances on The Tonight Show with Johnny Carson, on countless variety shows, and — far more lucratively — in Las Vegas. In a much more modest way, his hard-earned acting chops were also paying off. His long film résumé includes compelling work in the 1958 submarine favorite Run Silent, Run Deep and two 1960s cult classics — the war/heist comedy Kelly's Heroes and Roger Corman's science fiction/horror tale, X: The Man with the X-Ray Eyes. It's clear there was more to Rickles than just comparing people to sporting goods.

Still, it's true that Rickles hadn't always gotten his due respect. Believe it or not, being an unofficial court jester to the Rat Pack was the antithesis of cool with younger audiences during the late 1960s and on into the 1980s. It didn't help that he had terrible luck when it came to headlining his own television shows. Two variety shows failed, as did the short-lived 1993 sitcom Daddy Dearest where he starred opposite comedian Richard Lewis. Earlier, the Bilko-esque military comedy C.P.O. Sharkey managed to hang on for two seasons at the late-1970s dawn of the punk rock era. The network TV success enjoyed by his very close friend, ultra-low-key Bob Newhart, simply wasn't in the cards for the overtly-abrasive Rickles, although he did make a number of memorable guest appearances in other people's shows such as The Dick Van Dyke Show, The Addams Family, The Twilight Zone (1959), I Spy and Newhart.

Nevertheless, Rickles continued to shine as a hugely popular live performer. In 1985, Republican-convert Sinatra showed his support again by insisting Rickles be included on the bill at President Ronald Reagan's second inauguration. A lifelong Democrat, Rickles considered his performance at the event a career highlight. He and the Chairman again appeared together at the inauguration of George H. W. Bush in 1989.

From that point on, Rickles, a two-time grandfather whose one and only marriage lasted well into its fifth decade, never stopped working live. He continued to exercise his vastly underrated skills as an actor, including featured roles in Martin Scorsese's Casino and as the voice of Mr. Potato Head in the Toy Story quadrilogynote As Toy Story 4 was in production after his passing, archival audio of Rickles as Potato Head was used to retain him. Gradually, that long-delayed respect started to be paid.

In 2007, film director John Landis (Animal House, The Blues Brothers), who had worked as a very young P.A. on Kelly's Heroes, cemented his old friend's status with an outstanding biographical documentary masquerading as a television special. "Mr. Warmth: The Don Rickles Project" emphasizes the humanity and simple human decency of its subject alongside his superhuman comedy chops when working with a live audience. The result was an Emmy for Rickles, and the chance to continue doing even more of what the world loved him for — telling us we're all a bunch of jerks and making us feel great in the process, which he did up until his death on April 6, 2017, at the age of 90.