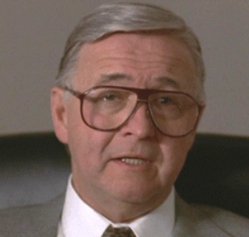 "Screw Gary Oldman, [Robert Ridgely] has the greatest range of any actor in history. Anyone who can play a pornographer, a furry loinclothed barbarian and a berry-obsessed closeted Chef deserves every acting award there is."
—Jon Gutierrez, from the Topless Robot article "9 Actors You Never Knew Voiced ’80s Cartoons

He started out as a cabaret entertainer before serving as a talk show host in the 1960's with Woody Woodbury. He went into acting, guesting on TV series such as Bonanza, Coach, Designing Women, Maverick, Newhart, Night Court, Wings and WKRP in Cincinnati; he was also a regular on the short-lived World War II drama The Gallant Men in 1962. He also acted in several films; among other roles, he became part of Mel Brooks' Production Posse, appearing in four of Brooks' movies.

Ridgely also played many animated roles. His ability to do a convicing hero voice served him well in action/adventure series such as Tarzan: Lord of the Jungle, Flash Gordon (1979), Thundarr the Barbarian, Centurions and Sky Commanders. In animated works, he was frequently credited as Bob Ridgely.