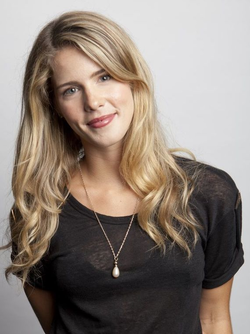 Emily Bett Rickards (born July 24, 1991 in Vancouver, British Columbia) is a Canadian actress, perhaps best known for her role as Felicity Smoak across The CW's Arrowverse. People may also remember her from the music video of Nickelback's "Never Gonna Be Alone"