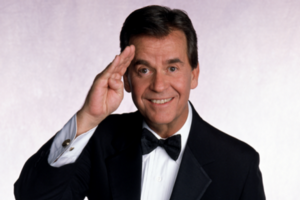 For now, Dick Clark... so long.
"Dick Clark is the most important man on the planet. Without his intervention each New Year's Rockin' Eve, the calendar would be unable to turn from December 31 to January 1, and time would become stuck at midnight."
— Dick Clark's page

Richard Wagstaff Clark (November 30, 1929 — April 18, 2012) was an American TV and radio personality who was affectionately known as "America's Oldest Teenager". Born in 1929, Clark would be the man that introduced many Americans to rock & roll and his signature program on New Year's Eve made him a face of the holiday.

Clark began work at a New York radio station in 1945 as a morning DJ, and during his college years he interned at a few different radio and television stations. His career would take off in 1952 when he would move to Drexel Hill, Pennsylvania and in 1956, took over as the host of American Bandstand when it moved to national television. With his time on the series, Clark introduced a new generation of teens and their parents to rock & roll. His success came from his clean and family friendly image along with his image to teenagers.

Clark would expand to hosting game shows in 1964 with his most famous run being on Pyramid. By 1972 he would venture into his second famous role by creating New Year's Rockin' Eve and creating his company Dick Clark Productions to produce the show. Clark wanted to challenge the New Year's Eve Special produced by Guy Lombardo, since he felt its big-band music was too old-timey. Clark would host his first edition of the show in 1973 and it would become popular enough that it became the single program that defined New Year's Eve in America.

In 2004 Clark suffered a stroke that left him unable to host New Year's Rockin' Eve for 2005. He returned the following year to continue his traditional countdown to midnight, all despite the stroke leaving his speech slurred for the rest of his life. Clark died on April 18, 2012 following a heart attack, but his presence on New Year's Eve was still a stand-out at the time of his death.