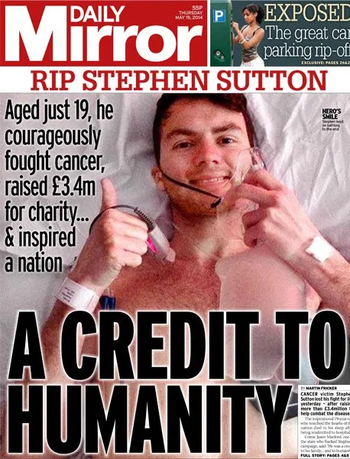 "They tug at the heart and fog the mind."
— Kent Brockman, The Simpsons
Advertisement:

A Human Interest Story is a type of news story that focuses on a person, group of people, and/or culture in an emotional manner. The goal is to create empathy between the audience and the subject matter, often with the intent to garner sympathy and/or awareness in the process.

There are a couple forms a human interest story may take. The most common is the "story behind the story" approach, which takes a fairly pivotal moment in history and focuses on one or more of the background people. For example, a story about a woman whose husband was in the World Trade Center on September 11th, 2001 would be a human interest story. Another approach is to find somebody with an interesting but otherwise historically unimportant story and do an exposé on them.

The most visible approach, however, is to aim for some controversial topic in the hopes of motivating the audience towards an action. An example would be an article on a minority family living in fear of a local white supremacist gang. Through the lens of a group of people, the article would also be aiming to raise awareness of a social wrong and trying to urge the audience towards an action (in this case, pressuring police to crack down on the gang).

While the term is inherently neutral, it has still gained quite a negative stigma over the years. The label usually only comes up when denouncing a story as emotionally manipulative, Pandering to the Base, and often veering towards Glurge. Within the journalism community, human interest stories are viewed with disdain and people who specialize in them as not really being "true" journalists. Editors have a love-hate relation, since a human interest story helps bring more readers/viewers in through word of mouth but tends to not reflect well on their integrity. As such, human interest stories tend to be given much less priority in terms of placement within the newspaper/magazine/show. It's a slow news day when a human interest story makes the headline. However, the priority is also regionally affected, as these are more common and accepted in some parts of the world than in others. Depending on how this plays out, it can lead to the Worst News Judgment Ever.

Contrast If It Bleeds, It Leads, which is when the humans are of secondary interest to the grisly details surrounding their demise. When a Ridiculously Cute Critter is involved, it's Yet Another Baby Panda.

Examples of human interest stories in real life would be much too numerous to list and also potentially controversial in assessment, so the examples section will concern itself with appearances in fiction.