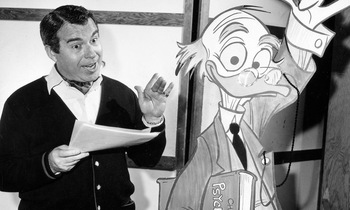 His early talents were used to "re-loop" voices of actors who could not affect foreign accents accurately (the most famous example of this is dubbing Tony Curtis' female voice in Some Like It Hot, where he also made a live-action appearance as a speakeasy-runner), and in 1942 he began voicing in cartoons.

His regular roles of note were of Boris Badenov and Inspector Fenwick on Rocky and Bullwinkle; Prof. Ludwig Von Drake on Disney's Wonderful World of Color; John Lennon and George Harrison on The Beatles cartoon; Fluid Man on Frankenstein Jr. and the Impossibles; Double Q, Morocco Mole and Squiddly Diddly on Secret Squirrel; Judge Oliver Wendell Clutch on Calvin and the Colonel; Snuffy Smith; Ignatz Mouse from Krazy Kat (the preceding two parts of Al Brodax's King Features Trilogy in 1963), Vangore in Arabian Knights, and the Thing on Hanna-Barbera's The Fantastic Four (1967). He was also the narrative voice of Jerry in the Tom and Jerry cartoon "Blue Cat Blues". He was the second voice of K.A.R.R. in Knight Rider, after Peter Cullen, in the 1984 episode "K.I.T.T. vs. K.A.R.R." In one of his later roles, he even played a character in The Puppetoons Movie (which was dedicated to him). He was also the voice of the narratornote (You'll laugh! You'll cry! You'll kiss three bucks goodbye!) in Hardware Wars.

Frees was heard in many of Rankin/Bass' animated Christmas specials, including The Little Drummer Boy, Frosty the Snowman, Santa Claus Is Comin' to Town, and Rudolph's Shiny New Year. His voice was also used for several characters in Disney Theme Parks attractions: the Ghost Host for The Haunted Mansion, the Auctioneer in Pirates of the Caribbean, and the Narrator in Adventure Thru Inner Space. In commercials, Frees voiced Toucan Sam, the Pillsbury Doughboy and Little Green Sprout (for Green Giant vegetables). And he lent his voice to some of Stan Freberg's comedy records, most notably serving as the narrator for Stan Freberg Presents the United States of America.

In addition to his voice work, Frees had minor live-action roles in films (including The Thing from Another World and Suddenly) and television. He also co-wrote and directed the movie The Beatniks, which was featured on Mystery Science Theater 3000, and dubbed the voice of the villain Khali in the English-dubbed version of Ilya Muromets which appeared on MST3K as The Sword and the Dragon.