Western Animation / Calvin and the Colonel 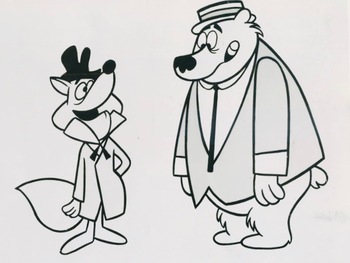 One of the first Prime Time Cartoon series, Calvin and the Colonel aired for one season (1961–62) on ABC. The show was essentially an Animated Adaptation of Amos 'n' Andy, except with cartoon animals. Both series were created by Charles Correll and Freeman Gosden, who also voiced the titular characters of each show; several of the original Amos 'n' Andy radio scripts were adapted for the cartoon series. The use of animal characters avoided the touchy racial issues that had plagued the earlier show.

The show's eponymous protagonists were the conniving Col. Montgomery J. Klaxon (voiced by Gosden), a fox, and his friend and patsy Calvin T. Burnside (voiced by Correll), a bear. The Colonel was constantly coming up with get-rich-quick Zany Schemes, which tended to backfire. Rounding out the cast were the Colonel's wife, Maggie Belle (voiced by Beatrice Kay); her sister, Susan "Sister Sue" Culpepper (voiced by Virginia Gregg); and the Colonel's shady advisor, Judge Oliver Wendell Clutch (voiced by Paul Frees).

This final attempt at keeping the Amos 'n' Andy formula alivenote (the radio show was cancelled in 1960; a live-action TV adaptation which aired in 1951-53 got cancelled due to the aforementioned racial issues and an attempt to revive it in 1956 got nowhere) was not successful. The show only lasted one season; even then, it was cancelled two months into its run due to low ratings and was only brought back two months later to fulfill contractual obligations.

Calvin and the Colonel provides examples of: