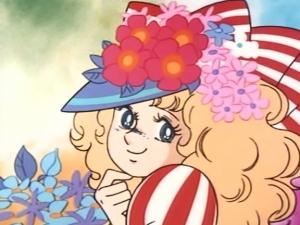 Isn't she sweet?
"Flowers grow and die, humans die, but they live on in the hearts of those who love them."
— Anthony Brown
Advertisement:

Candy Candy is a 9-volume manga, serialized in the magazine ''Nakayoshi' from 1975 to 1979, written by Kyouko Mizuki and illustrated by Yumiko Igarashi based on an original story written by Mizuki. This Shōjo series from the 1970s hooked up a whole generation of Japanese, Latin American and European girls. The anime ran from 1976 to 1979 on TV Asahi, at a total of 115 episodes. There was an English dub made, but the show's greatest success in North America was in French on the SRC network in Canada, where it ran on Saturday mornings for years.

The story is about the life and times of Candace "Candy" White, a beautiful blonde girl growing up in the first two decades of the 20th century, through her adoption; her convoluted love life, first with sweet Anthony Brown, and then with rebellious Terry Granchester; her friends and enemies, and her final determination of being a capable and independent woman.

The franchise also became known for the extremely bitter legal battles of the late 90s and early 2000s between Igarashi and Mizuki over credits and royalties. By the end of the legal battle, both Igarashi and Mizuki were required to approve any future Candy Candy products and projects. The led to an actual anime sequel being cancelled due to the souring of Igarashi and Mizuki's professional relationship, nearly all merchandise ceasing, and all licenses for overseas productions ceasing. This also turned Igarashi and Mizuki into unintentional copyright trolls.

Not to be confused with Honey Honey, another old-school shojo which is instead extremely silly (but does have the same lead voice actress), the Axe Cop villain by this name, or the Kyary Pamyu Pamyu song.