Whenever I appear, something frightening happens. It must be that terror summons me.
—Cat Eyed Boy 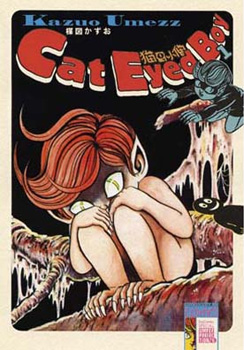 Created by Kazuo Umezu in 1967, Cat Eyed Boy tells the story of the title boy with cat's eyes, an especially human-looking son of a nekomata (who was forced to abandon his son to the care of a childless human woman since other monsters considered Cat Eyed Boy's human looks to be a disgrace and wanted him to be killed) who wanders from place to place, hiding in people's attics and witnessing gruesome supernatural happenings wherever he goes, occasionally helping and occasionally making things worse. No matter which he does, he will be shunned and feared by people who see him.

A live-action movie "Cat-Eyed Boy" of the series was produced in 2006.

This series/character provides examples of: