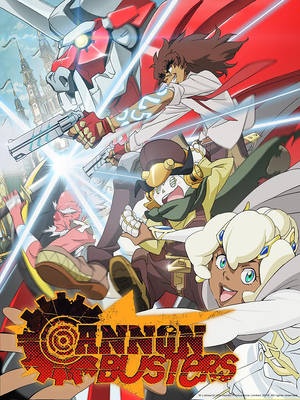 Cannon Busters is an anime based on LeSean Thomas' 2005 comic book of the same name, written and directed by Thomas himself, and with the animation done by the Japanese studio Satelight with Yumeta Company. Cannon Busters was initially crowdfunded on Kickstarter in 2014, successfully raising over $150,000 against a $120,000 goal, and after several years, finally led to the entire series being picked up by Netflix as part of their goal to expand into the anime market.

The story follows the adventures of Philly the Kid, an outlaw and the youngest wanted vigilante in the land of Gearbolt, who accompanies a young girl drone named Samberry, alongside an outdated repair bot named Casey Turnbuckle, as she seeks her owner Prince Kelbi.

Given that the comic it was based on only lasted two issues (due to Thomas' busy schedule keeping him from completing it in a time where indie comics weren't nearly as viable), Adaptation Expansion is practically necessary.