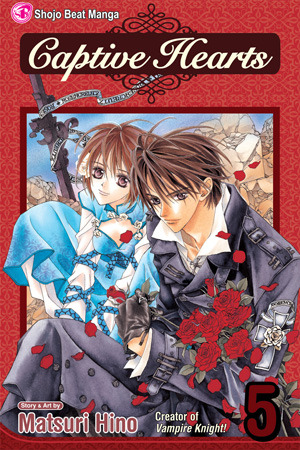 Captive Hearts (Toraware no Mi-no-Ue) is a Japanese manga series written and illustrated by Matsuri Hino. The Kuroishi and Kogami families have a strange bond: For 100 generations, the Kuroishi clan is compelled to serve the Kogami clan, with mind, body and soul.

Fourteen years ago, the entire Kogami family disappeared. The head butler, Yoshimi, and his son Megumi reside in the Kogami house, living a life of luxury. Megumi, in particular, is happily enjoying his easy life, until one member of the family is discovered alive in China. Megumi is determined to refuse to serve his new mistress, Suzuka, when he returns, but he quickly learns that the compulsion to serve is not one he can ignore; it is a full curse. When they first meet, he kneels before her and kisses her hand to welcome her home, then proceeds to carry her into the house. Though he tries to fight it, he soon realizes he cannot.

As the series progresses, friendship and romance grown between Suzuka and Megumi as they learn more about the curse. Suzuka is no happier with Megumi having to suffer the curse, and together they try to find a way to break it.