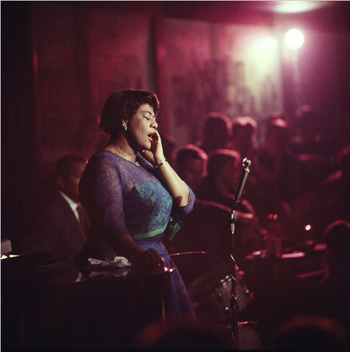 The First Lady of Song
"Forgive me if I don’t have the words. Maybe I can sing it and you’ll understand."
Advertisement:

Fitzgerald had a tough life growing up and was homeless for most of her teenage years in New York City. There she would dance for pennies to any passerby, thinking she'd become a great dancer. In 1934, the Apollo theatre held an amateur night, and Ella signed up to dance; however, seeing a better dance group before her, she opted to sing instead. The rest is history.

She was heard by one of the musicians in Chick Webb's influential band and was picked up by Chick Webb, “The King of Swing” himself. She cut one of the most influential and popular jazz songs with the band, “A-Tisket, A-Tasket” (1938), at 21. During The '40s, she slowly grew her reputation but hadn't yet broken through the white audience mainstream. Once signing with Verve in The '50s (a label created specifically for her), she put out various cover albums of famous songwriters and composers like Cole Porter, George Gershwin, and Irving Berlin, and in turn, created jazz standards and solidified her stardom. She collaborated with many famous musicians of her time like Frank Sinatra, and most famously, Louis Armstrong. Still prominent throughout The '60s and The '70s, she continued to sing and keep up with the times. Classics of this period include her Ella in Berlin album and her collaborations with guitarist, Joe Pass.

As time went on, Fitzgerald’s voice began to deteriorate along with her health due to her diabetes, so she retired from public life. In 1996, she died a musical legend.

Not only did Ella Fitzgerald win 14 Grammy Awards and Honorary Awards in her lifetime, but she was also inducted into the Grammy Hall of Fame six times. Her centennial in 2017 was celebrated by the Smithsonian and the Grammy Museum.

Ella Fitzgerald and her works provide examples of: