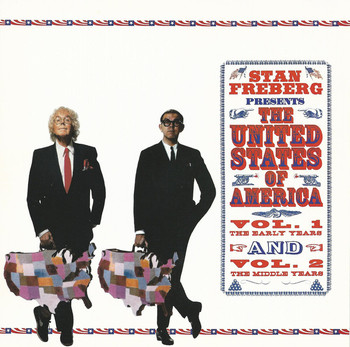 If you had a briefcase that awesome, you'd hang onto it for 35 years, too.
Announcer: Stan Freberg modestly presents The United States of America!
Advertisement:

The first volume (subtitled Vol. 1: The Early Years, and spanning from the first voyage of Christopher Columbus up through World War I) was released in 1961, with a second volume initially planned for the country's bicentennial in 1976; the second volume did not come out until 1996, twenty years after the planned release.

While Freberg promised in the liner notes of Vol. 2 that the third volume wouldn't take another thirty-five years to release (for one thing, he didn't think he'd be around that long), due to the death of his wife and his own health issues, the project was shelved. Freberg's death in 2015 seems to have brought any hope of Vol. 3 to an end.