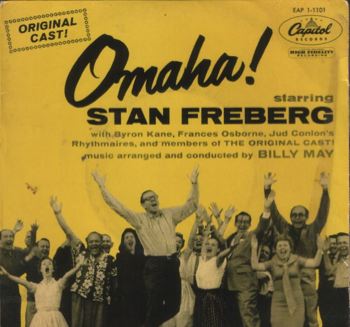 Whatta they got in "Omaha!" that they never have in other musicals?
Advertisement:

Omaha! is a recorded musical comedy with book, lyrics and music by Stan Freberg. Originally a six-minute, 38-second radio commercial for the Butter-Nut Coffee Company of Omaha, the original cast recording was issued on an EP in 1958.

The plot is simple: Biff (Freberg) loves Julie (Frances Osborne), and Julie loves Omaha, but their tender duets of love (for each other and for the town) are interrupted by Eustace K. Butter-Nut (Byron Kane), the only man ever to leave Omaha.

The musical numbers include an overture, four songs and a last-act finale, which is impressive for a show only ten minutes long.

These tropes can be found in Omaha!: