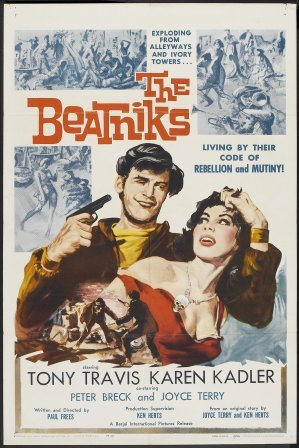 The Beatniks is a 1960 American film directed and co-written by Paul Frees and starring Tony Travis. Despite the title, this film contains no actual beatniks.

Eddy Crane (Travis) is a down-on-his-luck kid in the late '50s/early '60s who, along with his Five-Man Band pack of hoodlums — Mooney (Peter Breck), Red, Dark Chick Iris and Satellite Character Chuck — lives only to rob convenience stores for petty cash and then lounge around. That is, until one day when talent scout Harry Bayliss happens upon Eddy singing ("You call that singin'? That was nothin'!" You can say that again...) and quickly tries to sign him to a big record deal. Eddy is at first bitter and reluctant but eventually agrees, on the stipulation that his hoodlum gang can stay with him.

Off to downtown L.A. where Eddy meets Helen, Bayliss' secretary, setting up the inevitable Love Triangle. As Helen begins grooming the rather rough (or so we're told) Eddy into a straight-laced star, he begins to see the futility of his Beatnik ways (to clarify; no, not that kind of Beatnik). His Poisonous Friends, on the other hand, are bound and determined not to let him leave them behind in his rise to the top, and continue to create mischief and mayhem — which culminates when Ax-Crazy Mooney shoots a barkeeper dead during an altercation, thus jeopardizing not only Eddy's career, but his entire future.

Tony Travis had a very brief film and television career, fizzling one year after his big break in this movie.