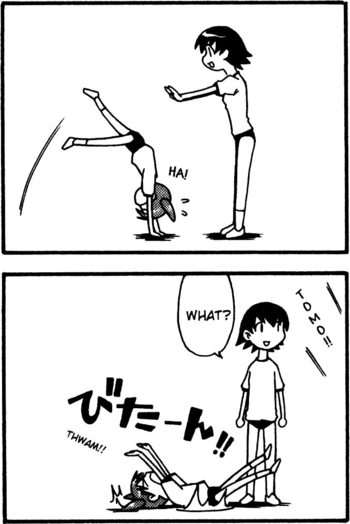 Well, she learned about trust, just not the lesson you wanted.
Son: (about to jump off a ladder) I’m scared, Dad!
Dad: (with arms outstretched, ready to catch him) Do you trust me, son?
Son: Yes.
Dad: C’mon, son!
Son: (falls down, hitting the ground as his father walks away)
Dad: Rule number one, never trust anybody.
— This Vine

If you aren't familiar with Team Building Exercises, Trust Exercises, Capacitation Courses, and the dreaded Weekend Seminar, you will be before long. The most common example is an exercise in which participants are paired off and one person of each pair is instructed to fall over backwards, trusting that their partner will catch them.

Since we've already established you are reading this on TV Tropes, we can assume these activities can and have been extensively lampooned, mocked, and generally made fun of quite a lot by people.

Has nothing to do with building trust in a person who does not deserve it.