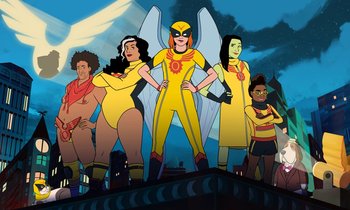 Birdgirl is a 2021 Dramedy Western Animation cartoon created by Michael Ouweleen and Erik Richter for Cartoon Network's Adult Swim block with characters developed by Erik Richter and Christina Miller. The show is a Stealth Sequel and spinoff to Harvey Birdman, Attorney at Law with production done by William Street.

Following the death of Sebben & Sebben's eccentric CEO, Phil Ken Sebben, his daughter Judy Ken Sebben (Paget Brewster) finds herself stepping into his shoes. Judy means well and wants to help, but she's got some obstacles in her way: primarily her excitable and incautious crime-fighting alter ego Birdgirl, whose approach to superheroics tends to leave a trail of collateral damage in its wake. Additionally, Sebben & Sebben tends to attract eccentric personnel and clients, whose ideas aren't always as ethical or sensible as Judy might like.

Helping her along the way are her employees and friends on "the Birdteam": Meredith the Mindtaker (Negin Farsad), Paul/The Feels (Tony Hale), Charlie/Strongarm (Lorelei Ramirez), Evie/Big Ten and her pet cat Birdcat.