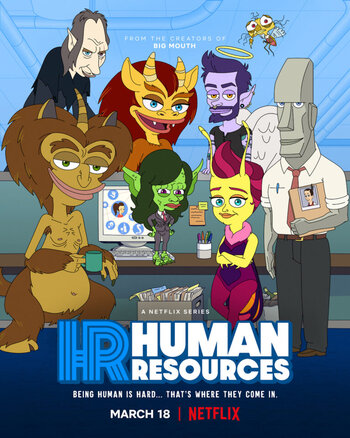 That’s just the way you make me feel…
Human Resources is an adult animated series from Nick Kroll, Andrew Goldberg, Kelly Galuska, Mark Levin, and Jennifer Flacket. It is a spin-off of their other series, Big Mouth.
Advertisement:

The series centers on the otherworldly Department of Human Resources and follows the various hormone monsters, depression kitties, logic rocks, shame wizards, love bugs, and other such creatures who guide humans from birth until death. Kroll, Maya Rudolph, Brandon Kyle Goodman, Keke Palmer, Pamela Adlon, and David Thewlis reprise their roles as Maury and Rick, Connie, Walter, Rochelle, Sonya, and the Shame Wizard respectively. Joining them are the likes of Aidy Bryant, Randall Park, and Ali Wong (who was in Big Mouth but will be playing a different character here).

The series premiered on Netflix on March 18, 2022. The following month, the creators announced

that the series had been renewed for a second season.

This has nothing to do with the trope Human Resources.