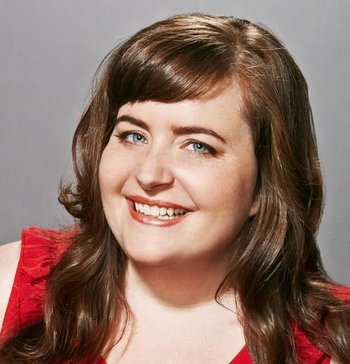 Aiden Mackenzy "Aidy" Bryant (born May 7, 1987 in Phoenix, Arizona) is an American actress and comedian.

Bryant is best known for serving as a cast member on the long-running NBC sketch comedy series Saturday Night Live since its thirty-eighth season in 2012. Some of her popular impressions and characters include White House Press Secretary Sarah Huckabee Sanders, British singer Adele, and Lil' Baby Aidy in a series of female-led music videos — the latter of which earned her (alongside Kate McKinnon) an Emmy nomination in the Outstanding Original Music and Lyrics category for "(Do It On My) Twin Bed"

Outside of SNL, Bryant has also appeared in films and television, such as Comedy Bang! Bang!, Girls, and The Big Sick. She also provides the voices of characters in animated works The Awesomes, Danger & Eggs, and The Star.