Western Animation / I Am Not an Animal 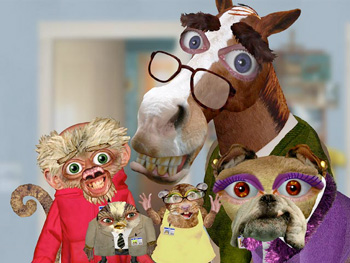 "In the year 2000, scientists at a top-secret laboratory carried out the most ambitious experiment ever attempted - the creation of talking animals. It was to go unbelievably tits up."
Advertisement:

The animation is made entirely of collages of actual photographs, and the first time you see it, it can seem quite disturbing.

Essentially a social satire, with the vacuous and frequently nonsensical conversation shining a light on how strange the world really is, whilst also being truer to real conversation than most TV shows.

There was only one series. It was written by Peter Baynham and Sarah Smith.

Probably named for the most famous quote from The Elephant Man.