Western Animation / Yvon of the Yukon 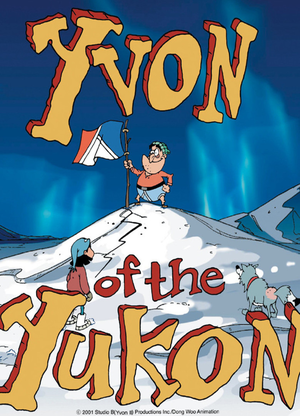 The time and place: 17th-century France. Yvon Ducharme, a courtier in the palace of King Louis XIV and proud servant of the French monarchy, is sent on a voyage to explore North America and claim land in the name of his country's glory. Unfortunately, Yvon's poor navigation skills sends him far off his intended course and into the frigid waters of Canada's northern Arctic coast, where the hapless Frenchman's boat rams into an iceberg, knocking Yvon overboard and cryogenically freezing him in a block of ice!

300 years later in Canada's Yukon territory, an Inuit teenager named Tommy Tukyuk is travelling through the icy wastes when his sled dog comes down with the need to answer nature's call. And as luck would have it, the dog's need for relief ends up thawing out Yvon's icy prison and reviving the French explorer. Yvon is quick to befriend Tommy and settles in Tommy's snowy backwater home, the Quirky Town of Upyermukluk, "the hottest cold town in the Arctic, midway between Shivermetimbers and Frostbottom Falls".

Thus Hilarity Ensues as Yvon, who believes that France is still being ruled by his beloved King Louis, attempts to adjust to life in the Yukon alongside his colorful new neighbors, who are happy to accept the presence of this strange little man from another era (and his lack of good hygiene)... so long as his antics don't cause too much trouble.

And that's the premise behind Yvon of the Yukon, an award-winning Canadian animated Grossout Show created by voice actors Ian James Corlett and Terry Klassen, both of whom are most famous for their work in dubbing anime for The Ocean Groupnote Yup! Goku and Krilin created a cartoon about a French guy in his underwear running around the Arctic!. Produced by Studio B Productions, this quirky little series of the Great White North ran from April 28, 2001 until January 24, 2005 on YTV for a grand total of 52 episodes split over 3 seasons. A beloved and iconic series in YTV's lineup of original productions, Yvon of the Yukon can perhaps serve as an idiosyncratic example of what Canada's cartoons have to offer.

Yvon of the Yukon provides examples of:

The theme song of Yvon of the Yukon explains the backstory of its eponymous character.

The theme song of Yvon of the Yukon explains the backstory of its eponymous character.