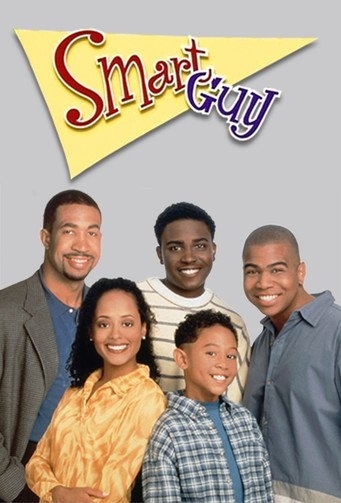 Smart Guy is a sitcom that aired on The WB for three seasons (technically, two-and-a-third, since the first season was seven episodes) from April 2, 1997 to May 16, 1999 and is the sister series to Sister, Sister (pun intended), by way of both being produced by Suzanne dePasse's production company dePasse Entertainment.note Although Smart Guy was produced by Walt Disney Television, while Paramount Television backed Sister, Sister.

It stars Tia and Tamera Mowry's real-life younger brother Tahj Mowry, playing the (initially) 10-year-old protagonist T.J. Henderson, who (after being discovered as a Child Prodigy) ends up skipping from 4th-gade all the way up to 10th-grade—he's transferred to Piedmont High School, a (fictional) high school in Washington, D.C. that's also attended by T.J.'s two older siblings, Yvette (Essence Atkins) and Marcus (Jason Weaver)—in fact, T.J. ends up being put in the same grade as his older brother (much to Marcus's dismay).

The show's primary focus is on T.J. trying to adjust from elementary school to high school and his trouble at fitting in not just with his significantly older classmates, but also kids his own age; secondary storylines (and in certain episodes, both the "A" and "B" storylines) usually focus on Marcus, Yvette and Marcus's best friend, Mo Tibbs (Omar Gooding). The kids are often guided in their situations and caught in their wacky schemes by Floyd Henderson (John Marshall Jones), the widowed single father of Marcus, Yvette and T.J. who runs his own roofing contracting business.

Even though the series didn't last long enough to reach the 100 episodes necessary to make it to broadcast syndication (it produced and aired 51 episodes), the series has had some staying power – adding to the fanbase that already watched the show on The WB – during its syndication run on Disney Channel (in certain countries such as the U.S. and U.K., and Family Channel – no, not that one – the one in Canada) during the 2000s, and has since aired in the States on BET, Up (the former Gospel Music Channel) and MTV2, along with being available for streaming on Disney+ since its November 2019 launch.

Not to be confused with The Smart Guy.