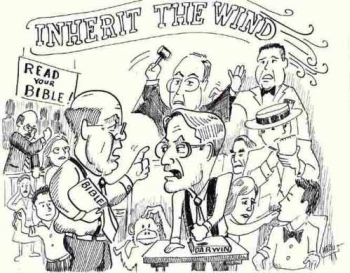 Whoever brings ruin on their family will inherit only wind, and the fool will be servant to the wise.
— Book of Proverbs 11:29 (NIV)
Advertisement:

Originally a 1955 play by Jerome Lawrence and Robert Edwin Lee, then adapted as a feature film in 1960 (and for television three times between 1965 and 1999), Inherit the Wind is a (very) fictionalized account of the "Scopes Monkey Trial

," a 1925 Tennessee court case which revolved around the teaching of Charles Darwin's Theory of Evolution by Natural Selection in public schools. The whole thing was actually a publicity stunt by the backwater town of Dayton, TN, leading to the trial being sensationalized beyond belief. It kind of went Off the Rails from there, bringing many (at the time) "incontrovertible" tenets of American thought, such as a literal interpretation of The Bible, into question.

The play revolves primarily around Bertram Cates, a schoolteacher in the small, "simple" town of "Heavenly" Hillsboro. Bert, based on John T. Scopes (from whom the real-life trial derives its popular name), is arrested for teaching the theory of evolution in his class in violation of a state law, and the film opens with him being placed under arrest before his class by the police. The town's mayor initially wants to keep the whole affair quiet, and some of the more prominent members of the community urge him to drop the matter entirely...but others (especially in the film; see below) agitate for more publicity, hoping to raise their town's profile to the national stage. That side wins when Matthew Harrison Brady — the analogue of William Jennings Bryan — announces that he's coming to Hillsboro to assist the prosecution. Cates writes to a newspaper in Baltimore for assistance, and is presented with Henry Drummond (Clarence Darrow by another name) as his defense attorney, and E.K. Hornbeck (standing in for H. L. Mencken) as a chronicler.

The 1960 film was directed by Stanley Kramer with Spencer Tracy as Drummond, Fredric March as Brady, Dick York as Cates, Harry Morgan as the judge, and (surprisingly) Gene Kelly as the all-snarking, never-dancing Hornbeck. It takes a few more liberties with the real story than the play does, but also incorporates more of the actual trial's transcript; today, most people thinking of the real trial instead remember details from the film. The film also has the distinction of being the first in-flight movie, according to the back of its DVD case and Wikipedia.

Speaking of what the other wiki says,

the play was intended as a criticism of of the anti-Communist hysteria of The '50s. However, with the newly-reborn debate on evolution versus creationism, the film is often shown at face value without the McCarthyism subtext being considered.