You Cannot Kill an Idea 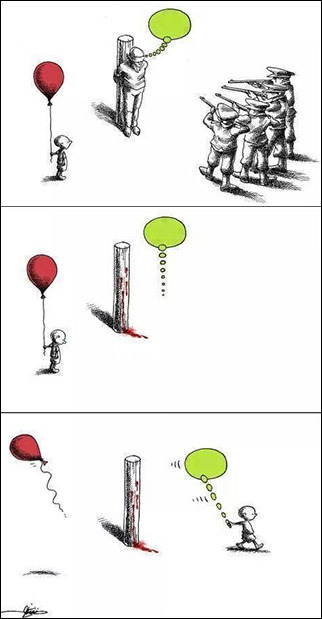 "A man may die, nations may rise and fall, but an idea lives on. Ideas have endurance without death."
— John F. Kennedy

What is the most resilient parasite? An idea. A single idea from the human mind can build cities, rewrite all the rules, and transform the world. Neither armies, nor dictators, nor even mortality have power over them; people die, but their ideas do not.

In fiction, we get heroes dying but hope passed onto the audience by knowing that somehow his idea has lived on. Sometimes the hero is a martyr and his death is a beginning as people use it for inspiration; they are throwing off some kind of mind-breaking torture attempt to show that the forces of fascism can't control them. A book of philosophy or some diary may have survived him, or one of his inner circle may tell his tale and so the story ends on a happy note, but not too happy. Our story is sad but the tide of inevitable revolution will come.

, who stated that "you can kill a man, but you can't kill an idea." He was later shot dead by a Klansman but the civil rights movement endured.

Super-Trope of Can't Stop the Signal. The characters who pass on the idea are likely Doomed Moral Victors. Likely to inspire an Innocent Bystander to make a Defiant Stone Throw. Compare We Are Everywhere for those bad ideas that can't be killed, As Long as There is Evil for evil in general that can't be killed, and the "Neurovirus" or "Memetic Science" for bad ideas that deserve to die but are too sentient and/or too contagious to be killed by law of morality, man or god (and don't expect Time Travel or Villainous Rescue to fix it either). Compare the Streisand Effect and Curse Relay. See also As Long as There Is One Man.