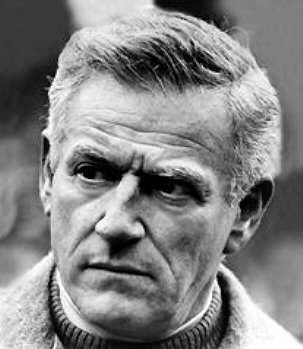 "I'm always pursuing the next dream, hunting for the next truth."
Advertisement:

Stanley Earl Kramer (September 29, 1913 – February 19, 2001) was one of the major mainstream producers and directors in Hollywood's history, famous for his films in the 1950s and '60s that determined to bring a voice to the major social problems of his time.

He was originally a producer with films as disparate like the first adaptation of Death of a Salesman, the breakthrough Western High Noon and even the surreal The 5000 Fingers of Dr. T, written by Dr. Seuss.

However, when directors started getting the real press as creators of film, Kramer decided to take that role. From that decision, he created classic films like The Defiant Ones, On the Beach, Inherit the Wind, Judgment at Nuremberg, Ship of Fools, and Guess Who's Coming to Dinner. As he started to become known for serious dramas, a friend dared him to make a comedy, based on an outline he recieved. Kramer accepted, and made the ultimate comedy, It's a Mad, Mad, Mad, Mad World.

Unfortunately, as idealistic as those films were, they were often derided as being preachy with outdated issues and artistically inept from a director who still thought like a producer.

That already stung him and with the rise of New Hollywood, his career faded, but his idealistic example lives on with the Producers Guild of America's Stanley Kramer Award that awards films that address important social issues.

Films directed on this wiki:

Tropes displayed by him: