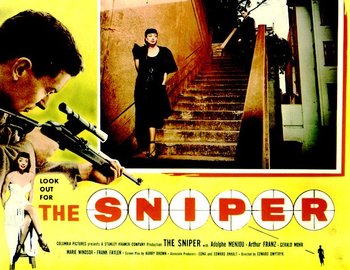 The Sniper is a 1952 American Film Noir, directed by Edward Dmytryk, written by Harry Brown and based on a story by Edna and Edward Anhalt. The film features Adolphe Menjou, Arthur Franz, Gerald Mohr and Marie Windsor.

Eddie Miller, a delivery man, struggles with his hatred of women. This hatred is exacerbated if he feels drawn to a woman who turns out to be unattainable, he tends to see this as a personal affront. Also, he is especially bothered when he sees women with their significant others. Miller knows he is disturbed and, out of despair, burns himself by pressing his right hand to an electric stove. The doctor treating him in an emergency room suspects he might need psychological help, but gets too busy to follow through.

Miller begins a killing spree as a sniper by shooting women from far distances with an M1 carbine. Trying to be caught, he writes an anonymous letter to the police begging them to stop him. As the killings continue, a psychologist has the keys (early criminal profiling techniques) to finding the killer.

No relation to Sniper, the action film series with Tom Berenger.

Tropes in The Sniper include: