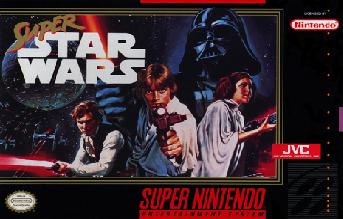 Super Star Wars is a series of action-platformer games based on the original Star Wars trilogy, developed for the SNES by Sculptured Software and LucasArts.

The plot of the first game closely follows A New Hope, and consists of 14 levels. The player can control Luke Skywalker (later Han Solo and Chewbacca too), from the Dune Sea of Tatooine, through the Mos Eisley Cantina up until the trench of the first Death Star. The gameplay is essentially this: Luke & Co. are gunning down various Mooks on each level, while fighting their way to the end of the level, where the boss awaits them. In a few of the levels, the player can control vehicles (Luke's speeder, much later his X-Wing); these levels feature and showcase the capabilities of the SNES' then brand new MODE-7 chip, which provides a 3D-like experience. Then the very last level is like an FPS, where the player has to defeat an endless swarm of TIE Fighters by moving a crosshair with a D-Pad and shooting wildly.